“Think warm” was the concept behind The Tim Wilsey Trio’s performance Friday, Jan. 19, at the Orland Park Public Library, as a variety of salsa, Latin jazz, bossa nova and Hawaiian standards were featured on the diverse setlist, the origins of which spanned the globe.

The evening showcase provided a sonic sojourn from the cold Chicago-area weather, as the sounds of sunshine radiated from the musicians. From the irresistible first notes of the opening number, “Brazil,” audience members found themselves swept away in bright, bouncy rhythms. Before the concert began, band leader and percussionist Tim Wilsey explained why “Brazil” is the perfect way to start the show.

“The pulse penetrates and continues to drive throughout the whole song,” he said. “It’s a lot of fun. And I get to do an opening drum solo on it, so that’s always good.”

Familiar songs, including “Besame Mucho” and “Oye Como Va,” had concertgoers tapping their toes, but it was an early hit from Anthony Dominick Benedetto (also known as Tony Bennett) that hit the bull’s-eye with the crowd.

Barrett Haselwood delivered the vocal melodies throughout the night, while delicately conjuring sounds of Hawaii with his ukulele.

“This music is so timeless,” Wilsey said. “We play Hawaiian music, as well, because Barrett lived in Hawaii for a number of years and is a former music director for Carnival Cruise Lines.”

Wilsey said, “We have a love affair with the style of music that we enjoy playing, and this music has become very popular around Chicago — in the city and the suburbs.”

Wilsey’s music is so in demand that this 2018 performance was booked, in part, because of the popularity of his previous appearance at the Orland Park Public Library.

Shane Peterson, outreach services assistant, explained, “Whenever we have a musician who is received really well, and we have people ask to have them back, and they have something else that’s a little different — his previous set was more jazz-oriented. We always aim to fit that into our schedule.”

“We wanted to listen to some music here and experience a little cultural enrichment, you might say,” said Larry Segura.

Irene Segura added, “We like coming to the outdoor concerts in the summer, too. Those are really nice, and they have some really good music.”

Library patrons who attended The Tim Wilsey Trio concert also had a chance to experience the Conquering Low Earth Orbit NASA exhibit, which surrounded the stage space in the lobby. This special display — along with the second-floor exhibits — will be “lifting off” from the library in the spring, so it only will be viewable in Orland Park for a short time longer.Type your paragraph here.

“I have had a wonderful opportunity in working with Tim at my building. He puts on outstanding programs, engages my residents, and is easily one of the nicest vendors I work with. He can create programs, keep with our theme, and manages to keep everything uncomplicated -- scheduling is never an issue. Tim is a definite when it comes to Resident Programs!”

"Tim did a wonderful job presenting the history of the Chicago Mafia to our patrons. They enjoyed his delightful demeanor and he kept the audience engaged through out the entire presentation. If you're looking for a professional speaker educated on his topic, Tim is the guy to book!" 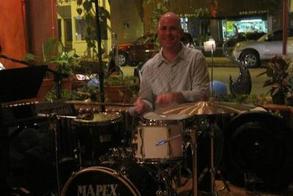 Tim has been performing in The Chicagoland Area for over 20 years and as a professional drummer for over 30 years. His birthplace and upbringing entrenched him into the Boston and New York music scene, all the way into his early 20's until he moved to Chicago.   Tim’s background studies of Big Band Swing, Be Bop Jazz and Chicago Soul/Blue’s Legends lends itself to his musical selection and band performance. 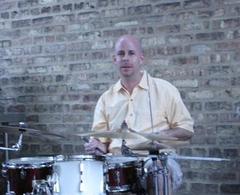 Music is my love, my passion, my dedication and my commitment.  I have been blessed with a gift and it is my goal to share it with as many people who come into my life.